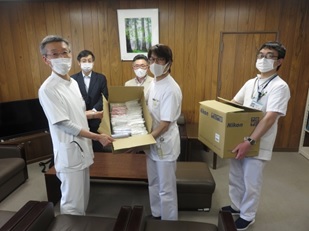 OTSU,Sshiga－In the midst of spreading of the COVID-19 pandemic, representatives of Shiga Jichiroren directly handed more than a hundred of plastic raincoats to Mr. Wakabayashi, the director of Otsu City Hospital. Shiga Jichiroren had been calling on its members to donate sanitary supplies such as medical protective clothing, in response to requests from union members working on the front line of medical treatments.

The donation of raincoats from the union pleased union members in and administrative staff of the hospital. The director thanked the Shiga Jichiroren members and said, “We can never have enough of these now. Really helpful.” Hospital workers also said, “What we are using is almost disposables, which are really going to help us. We appreciate the union’s support.”

※In Otsu City, 11 city workers were confirmed infected with COVID-19, as so called “cluster infection” happened in the middle of April.