“For working women to shine” 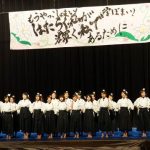 Women working in local governments gathered on September 2 and 3 in Nagoya City, Aichi Prefecture, and discussed how to balance their work and life and how to create a workplace where they can work with human dignity. This is the 37th national exchange meeting with 660 participants. Young members of the local organizing committee led the effort to bring the event to success.

In her keynote speech, Jichiroren’s Women Committee Secretary Tagashira stated that this meeting has been a place for women working in municipal offices and other public sectors to gather together regardless of difference of unions they belong to. She made the following action proposals: developing cooperation in workplaces and communities to defend and make the best use of the Constitution; promoting gender equality in workplaces and the society; and exchanging workers’ demands to develop labor unions’ strength.

Representatives of three unions reported on their activities.

Reporting on activities for childcare workers’ workstyle reform, a member of the Adachi Ward employees’ union, Tokyo, explained efforts to improve their working situation in which 95% of daycare workers have worked overtime without pay and 91.2% have brought their overtime work to their home. She reported that by filing complaints with the Personnel Commission and the Labor Standard Inspection Office, the union has successfully made the management pay childcare workers for their unpaid overtime work for the last two years and hire new staff for the first time in seven years.

A representative of the Osaka Prefectural Workers’ Union revealed that a pregnant worker almost had miscarriage after doing overtime until the last train, a case showing how difficult for workers to exercise their rights under the administration of the governor, the representative of the Japan Innovation Party. In order to restore safe working conditions where women can give birth and raise child without fear, the union and its youth committee have worked together to give counsel to young fathers and mothers and carried out other activities to listen to and achieve union members’ demands, she reported.

Activities to create a workplace where nurses can continue to work were reported by a municipal hospital nurse, representing the local Toyohashi City employees’ union, where the meeting took place. In her workplace where more than 50% of nurses work the night shift at least nine times a month, they demanded the decrease of the number of night shift work up to eight times a month, and won an extra allowance for those doing it more than nine times a month. What they really want is to have more time to spend with their family. She expressed the importance of the unions’ role to realize workers’ requests, such as to make lights in a parking lot brighter so that workers do not have to feel dangerous and to provide a maternity uniform to pregnant nurses. Workers’ cooperation is essential for the union to play such a role, she added.

“Do not sleep on your rights.” 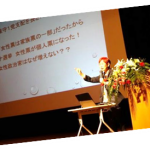 Sociologist Chizuko Ueno gave a lecture titled, “Can women really shine? The front and back of ‘a society where women shine’.”

Pointing out that the Equal Employment Opportunity Law was established at the same time as the Labor Dispatch Law, Ueno said neoliberal economic policies, while calling for ‘a society where women can shine,” is aimed at making use of women as disposable labor force. She clarified prescriptions to counter this move: (1) shortening working hours; (2) abolishing the seniority system; (3) establishing “equal pay for equal job” rule as well as providing childcare and nursing care as public services. She expressed that it is important to fight to change the Abe Cabinet’s runaway policies. 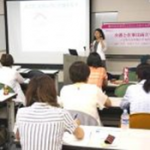 The workshop “For being yourself bright – Are you maintaining your body health?” was full beyond capacity. A participant of the workshop “To pass Article 9 and 24 of the Constitution down to future generations” expressed, “I realized that the Constitution relates to our social life and that the relation is very important for us like the air.” The workshop “Design your career and find your strength” was organized for the first time and was well received by participants who said that it gave them a chance to reflect on themselves. The workshop “How to improve working conditions” explained the contents of and possible campaigns in response to the “fiscal year-term employment system” affecting non-regular municipal workers, scheduled to be introduced in 2020. Some participants expressed that out of many non-regular workers only a few belong to a union. Others said that they want to talk frankly to their non-regular colleagues about the new system to raise their awareness