In Shimizu Ward of Shizuoka City, Shizuoka Prefecture, junior high school students had to either bring their lunch from home or buy a lunch box provided by a private food provider. However, since April 2019, the municipal government has adopted a policy to directly offer safe lunch thanks to efforts of a school lunch branch of the Shizuoka City Workers’ Union affiliated to Shizuoka Jichiroren.

The lunch boxes delivered by their food service provider were unpopular among students who complained that meals were cold and tasteless. Some students skipped lunch because they were unallowed to bring their own food under the outsourced lunch program. 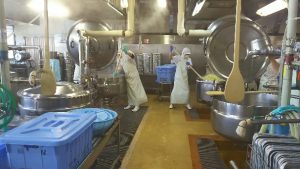 The union’s school cook branch, which started its activities in 2011 to achieve a direct municipal management of school lunch services, visited a school lunch kitchen directly operated by Toyohashi City, Aichi Prefecture, and observed how 5,000 portions of nutritious meals are cooked from fresh and offered every day amid a limited number of workers in Toyohashi City. After the observation, branch executive members held a serios of discussions and submitted, to the education board of Shizuoka City, a proposal that the municipality use its own facility (the East School Lunch Center) to directly operate lunch services for junior high schools in the Shimizu district. It also lobbied the city assembly together with local citizens’ organizations. 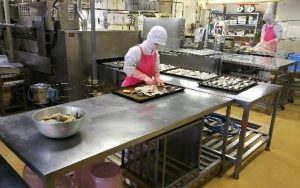 As a result, the mayor of Shizuoka announced that school lunch would be cooked in the municipal facility for junior high school students in the Shimizu district. The union’s proposal has encouraged the city to implement the policy. Kitchen workers, who initially expressed anxiety about their new jobs, are now working hard for children in the Shimizu district. Nutritionists and cooks are working together to create thematic lunch menus, such as maccha tempura, using local ingredients like green tea and sakura ebi, literally meaning cherry blossom shrimps, a famous local specialty of the region.

The school lunch department of the Shizuoka municipal government plans to contract out the East School Lunch Center within five years. The union calls on the authority to maintain the direct management of the facility to keep providing safe and delicious lunch for students. It also continues its efforts to make the city launch a recruitment drive for kitchen workers for better school lunch services.