As the most important day of action in the 2021 Spring Struggle, members of labor unions conducted rallies and publicity actions in workplaces and on the streets on March 11.

In Japan, during February and March every year, many private and public sector unions work together to urge their employers to raise wages and improve working conditions. They also call on national and local governments to address several issues for a better life for all. This year, they strongly demanded that the governments strengthen testing and treatment systems as coronavirus countermeasures and provide support to small- and medium-sized business owners and workers (especially women and non-regular workers) suffering worsening corporate performance.

In Chiba Prefecture, many workers accepted flyers with packets of pocket tissues union members handed out in front of Chiba Station. Chiba Jichiroren President Toshiaki Takeuchi introduced news reports that more than 90,000 workers are expected to be dismissed (according to a labor ministry survey) amid the Covid-19 pandemic. He appealed to passers-by by saying that even if they faced dismissal, they should not give up or be troubled alone but consult with labor unions.

Union members in Kochi Prefecture held a similar action at an intersection in front of the prefectural office building during morning commute. Kochi Jichiroren President Keiji Tsutsui spoke, “In the midst of the CODIV-19 pandemic, the widening disparity has once again become a major issue in Japan’s society. We must eliminate the disparity and build a just society where everyone can have a decent life with an eight-hour workday. Amid the coronavirus recession, let us create a nationwide uniform minimum wage system of 1,500 yen and raise the level of wages.”

In Motoyama Town, Kochi Prefecture, 40 union members took part in a morning rally in front of the town hall. They reported the status of negotiations with the authorities regarding demands they submitted for an increase in wages and personnel and determined that they will continue to strive to realize the demands.

March 11 marked the 10th anniversary of the Great East Japan Earthquake that struck the Tohoku region. Rallies and publicity actions were also held in the disaster-hit municipalities along the Pacific coast, where participants mourned for their colleagues who died in the disaster and called for recovery of affected areas. 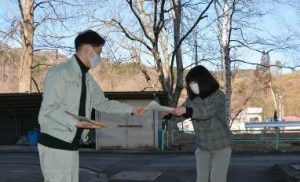 Union members of Kuji City Workers’ Union, Iwate Prefecture, distributed flyers to employees early in the morning in front of the main municipal office and a branch office. Union executive member Ryosuke Moichi said, “On the 10th year since the Great East Japan Earthquake, I was reminded of the importance of our uniting ourselves in the workplace and how powerful it can be. I was happy to be able to take action on this day.”

Encouraged by the nationwide efforts of the Spring Struggle, many labor unions in the private sector have won a wage increase of 5,000 yen per month (1.8%) as of the end of March, despite poor business results under the COVID-19 pandemic.