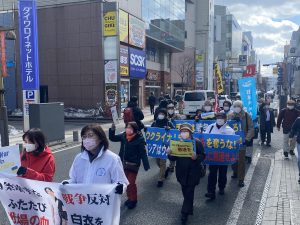 In its effort to condemn Russia’s invasion of Ukraine, the Iwate Prefecture Joint Center against Constitutional Revision (Secretariat: the Iwate Federation of Trade Unions) collaborated with labor unions, democratic organizations, as well as political parties and jointly held an urgent protest under the slogan “Russia must withdraw immediately!” during the lunch break on March 2.

Representatives of Iwate Jichiroren took part in the action, along with those of the Iwate Federation of Trade Unions, the Iwate Federation of Medical Workers’ Unions, the Constitutional Democratic Party of Japan, the Japanese Communist Party, and labor unions which are membership of the Iwate Union Center for Peace and Environment and affiliated with the Japanese Trade Union Confederation (Rengo). Participants gave speeches and appealed for signatures against Russia’s invasion and against the revision of the Japanese Constitution.

After the rally, they joined “Hinamatsuri (Dolls’ Festival) Parade” hosted by Peace Action Iwate at the same time. They marched through the central area of Morioka City, Iwate Prefecture, shouting: 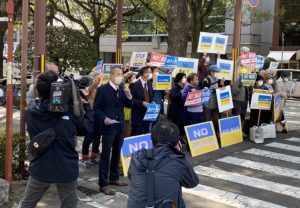 The People’s Big Movement organizing committee in Kochi Prefecture, which Kochi Jichiroren is a member of, hosted a protest against Russia’s invasion of Ukraine in front of the prefectural government office during the lunch break on March 2. Among about 30 participants of this action were President Keiji Tsutsui and two other Kochi Jichiroren members.

President Tsutsui, a co-chair of the People’s Big Movement organizing committee and the president of the Kochi Federation of Trade Unions, opened the protest action by saying, “Russia’s military action is clearly the violation of the UN Charter. Its barbaric act should never be tolerated,” and called for an immediate ceasefire and withdrawal of Russian troops. “This war of aggression has made it clear that war cannot be a means to resolve conflicts and must be renounced in the international society,” said Tsutsui, who also expressed his determination to further strengthen the protest actions.

Other speakers included representatives of the Kochi Council against Atomic and Hydrogen Bombs, the Kochi Teachers and Staffs Union, the New Japan Women’s Association, as well as Kochi Kenpo Action, a coalition of civil society groups in Kochi.