Jichiroren held a national exchange meeting in Tokyo on June 2, aimed at eradicating long working hours and improving safety and health at work. 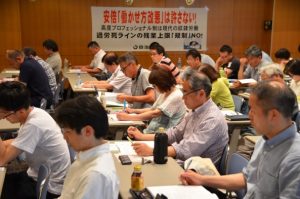 Jichiroren has carried out a campaign throughout Japan to visit its members’ offices and to address issues of long working hours. The meeting was organized to share achievements in the campaign and lessons for future activities.

The meeting also included a basic workshop about a labor-management agreement based on Article 36 of the Labor Standards Law and the Labor Ministry’s guidelines as well as a lecture titled, “For a workplace free from death or suicide from overwork – the significance of struggles to win work-related disease certificates in public sectors.”

An executive member of the Yao City Workers’ Union, Osaka, reported on roles of the safety and health commission of the city’s main office, which requires each department to reveal the number of workers who have worked more than 45 hours or 100 hours of overtime a month and to deal with such employees individually. In the absence of a “36 agreement,” it maintains a monthly overtime cap of 80 hours and bans overtime work after 10 p.m.

An executive member of the Meguro Ward Employees’ Union, affiliated to Tokyo Jichiroren, reported that during negotiations on a “36 agreement,” the union successfully had the city promise to pay for its employees’ overtime work and to reduce its limits on hours of overtime work they can report. His union also organized a meeting for the conclusion of a “36 agreement” for childcare workers, with the city’s childcare division chief attending, and reached a consensus on appropriate ways to report time worked beyond the employees’ regular work schedule.

Representing a labor union of Hamamatsu Medical Center affiliated to Shizuoka Jichiroren, its executive member spoke about its efforts to support nurses who tend to abstain from reporting overtime work. The union helped them to foster supportive environments for workers to report overtime, and encouraged them to inform the union and the commission about their overtime work exceeding two and a half hours. As the efforts have been made, the atmosphere in workplaces became favorable to the staff getting leaves. The city office, which now has more nurses who want to work at the city hospital, thanked the union for its activities.

Speaking about the use of a local personnel commission and labor standard inspection offices, an executive member of the Shiga Prefecture Employees’ Union, affiliated to Shiga Jichiroren, reported that thanks to recommendations by labor standards offices, the center for lifestyle-related diseases and public works offices improved their employees’ long working conditions. The union also requested the prefectural personnel commission to conduct investigations on how public workers refrain from reporting overtime work, which have led to improving the situations in some workplaces.

An executive member of a daycare center branch of Nagoya City Workers’ Union said that the union investigated how unpaid overtime work has been institutionalized among daycare center workers and focused on the issue in negotiations with the city office. He stressed that the union was determined to win an increase in staff numbers with public opinions by telling citizens what long hours the staff are working.

Jichiroren Secretary General Satoshi Nakagawa stated that for the last 10 years, 192 municipal workers throughout Japan have died or committed suicide due to overwork. He added that while regular workers suffer long working hours and health problems, non-regular workers are put under harsh working conditions and unstable employment.

“Work-style reform bills would not only increase a risk for karoshi (death from overwork) but also bring negative impacts on karoshi certification procedures. Let us work hard in workplaces and communities to scrap the bills in the House of Councilors,” said Nakagawa.