At a study meeting with business owners and scholars in Ehime 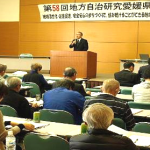 Municipal workers in Ehime Prefecture held a study meeting on November 12 in Matsuyama City to examine their work and community to make their municipalities friendlier to residents who hope to keep living in their community.

This is the 58th annual meeting they hosted with Ehime Jichitai-mondai Kenkyujo, a civil research institute for local government, taken part in by 96 union members and 23 citizens

For its symposium on local revitalization and promotion of ‘small- and medium-sized enterprises’ (SME), the meeting invited Junya Yoneda, managing director of the Ehime Prefectural Association of Small Business Entrepreneurs, as a coordinator and to give a keynote speech, and Ken Yazuka, heading the Matsuyama City Government’s local economy department, to report on the city’s activities in accordance with its basic ordinance for promotion of SME.

Yoneda said, “Most of businesses and jobs are provided by small and tiny companies. A local community with small businesses in good condition can maintain employment and enjoy increase in the number of residents.” He added that to encourage smaller businesses is a significant task of a local administration for community development and vitalization, and thus each municipality needs to adopt a basic promotion ordinance of SME. He suggested three practical tools for municipalities to promote community development: fact-finding survey, ordinance, and roundtable meeting.

Yazuka stated that one of the objectives of the city’s department for local economic affairs is to maintain and develop local employment and that the city adopted the ordinance with a firm resolve as an administrative body. Maeda said that so-called “black companies” bring negative impacts on their production, human resource management and social development. “Labor unions can play a role of restraining ‘black companies’”, he added.

The followings are some feedback from participants: Discussions focusing on small companies were very useful and practical; The idea of the Association of Small Business Entrepreneurs is also important for local administration; Learning SME promotion measures for the first time, I realized the need to work hard on this topic; It was encouraging to see them making positive efforts based on the ordinance with hope.