The administration of Prime Minister Shinzo Abe, while emphasizing “social security for all generations” and concepts of “self-help and mutual assistance”, tries to obscure the national government’s own responsibility (public assistance) on social security services and to change the whole system into the one in which major corporations can make large profits.

The Ministry of Health, Labor and Welfare on September 26, 2019 released a list of about 400 hospitals throughout Japan as candidates for possible realignment and consolidation. The list was made based on standard criteria without considering situations of each local area, thus lacking adequacy. It is also grave that it ignores the principle of local autonomy recognizing each local municipality’s authority to decide what to do in its own area.

Many hospitals, local governments, and residents have criticized, opposed, and expressed anxiety about this outrageous move by the health ministry. “Our hospital is necessary for our residents, and we cannot lose it,” said a municipal head. A hospital worker expressed, “Releasing the names of hospitals has made it difficult for us to secure doctors and nurses.” 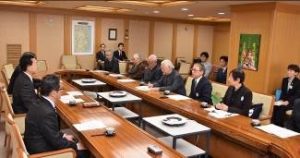 In Iwate Prefecture, Iwate Jichiroren in November established a prefecture liaison council to protect local medical services with prefecture chapters of the National Confederation of Trade Unions (Zenroren), the Japan Federation of Medical Workers’ Unions (Iroren), and the Central Council for the Promotion of Social Security (Shahokyo). On December 16, its member visited and talked with Iwate Governor Takuya Tasso. The governor said in the meeting, “The national government’s release of the hospital names based only on a nationally-uniformed analysis disregards unique conditions of each region. It is hard to believe that it was based on a fair point of view.” He added that while prefectural hospitals consider reviewing the number of their beds, the prefectural government is requesting that the national government’s plan reflect local conditions. 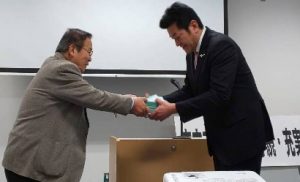 In Uwajima City, Ehime Prefecture, an association of residents to maintain and improve the city’s Yoshida Hospital, joined also by the hospital’s labor union, has led a signature campaign to protect the hospital and improve its medical standards. In a short period of time, it collected about 4,000 signatures. The association’s general meeting was taken part in by about 60 people, including residents, the director of Yoshida Hospital, and city assembly members, who submitted the signatures to Mayor Fumiaki Okahara. The mayor stated, “Yoshida Hospital is cherished by residents and necessary for them. The health ministry’s announcement is inconvincible. We keep listening to your opinions and make efforts to maintain the hospital and recruit more doctors.”

Backed by those collaborative local actions throughout Japan, representatives of Zenroren, Shahokyo, and Jichiroren made representations to the health ministry on January 15 as part of their joint campaign against realignment and consolidation of public hospitals. Demanding withdrawal of the plan, Jichiroren Vice President Kyoko Takayanagi said, “Instead of imposing a unilateral policy nationwide, providing medical services that meet the needs of each local area must take priority. It should be considered based on the viewpoint of how to protect residents’ lives and health.”