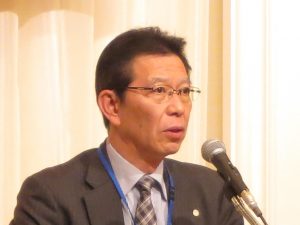 Don’t allow a mal-revision of the Constitution; Wage increases for All Working People; Better Workplaces and Communities for people to keep working and living there free from fear.

Jichiroren holds annual discussion meeting usually in early December for the spring struggle. Union members coming from local unions nationwide learn lessons from each other’s actions to actively organize their campaign. This year, the meeting took place in Shizuoka City, Shizuoka Prefecture on December 1 to 2. Among about 170 participants, 17 members in total made a speech during a two-day discussion.

At the meeting, Satoshi Nakagawa, Secretary-General of Jichiroren, stressed the task calling for us to fight the People’s Spring Struggle 2017, saying, “Let’s increase our efforts to raise the level of pay for all working people including those who work at private small- and medium-sized businesses, and at the public-sector.” 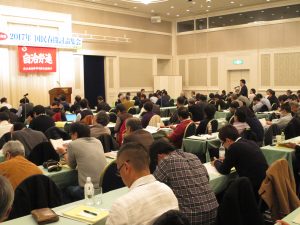 “As the pay disparity among regions has been widening, there have been an increasing positive response from local authorities and people to our unions’ demands, such as an increase in the minimum wage, the legislation of a single national minimum wage, and the pay raise and improvement of working conditions for public service workers and non-regular employees,” said Mr. Nakagawa. He added, “We have had more and more occasions to take joint actions.”

Among the 17 speakers of the meeting were Secretary-general Osamu Koizumi, of Shizuoka Jichiroren, and vice president Katsuyoshi Kawamata, of Kyoto Jichiroren.

Mr. Koizumi reported on Shizuoka Jichiroren’s activities aimed at getting the “pay based on the cost of living”, and pointed up the importance of the minimum wage and legislation of local laws for public contracts.

Mr. Kawamata told about Kyoto Jichiroren’s campaign for called “Kenpo-jichitai zukuri”, which means turning local governments into those that make use of the constitution through their services for community. Showing a copy of “Kenpo Techo” a pocket edition of the Japanese constitution and a booklet, titled “Local Governments under the War” (both were issued by Kyoto Jichiroren), he reported on their cross-prefecture caravan to talk with local chief executives over the issues related to the constitution.