Jichiroren on October 1 made representations to the National Governors’ Association, the Japan Association of City Mayors, and the National Association of Towns and Villages, demanding that they jointly request the national government to help develop local administrations, strengthen disaster prevention systems, and improve wage and working conditions for public workers. 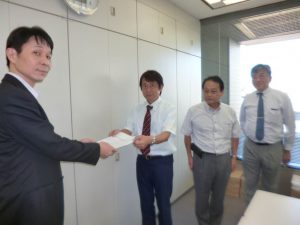 A series of recent natural disasters have revealed a severe shortage of municipal workers and their excessively long working hours. Furthermore, municipalities are facing difficulties in securing a sufficient number of workers due to an increasing gap of their wages in different regions.

Jichiroren’s Vice President Sakurai and its central executive committee members Nishi, Sugimoto, and Kubo met and talked with officials of the three organizations. 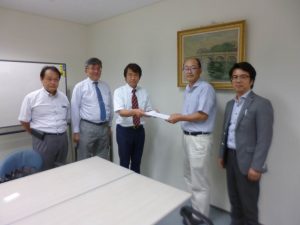 Long working hours, which could lead to death from overwork or mental health issues, are rampant among municipal employees as they are working hard for reconstruction of disaster-stricken areas amid a shortage of workforce. To put a cap on their working hours is an urgent task. It is also necessary to reduce regional gaps of their wages for securing enough municipal workers. A research group set by the Ministry of Internal Affairs on a “2040 Initiative for Local Autonomy Strategies” proposed in its report that the national government will take the lead in halving the number of municipal employees and privatizing their jobs by utilizing AI technologies without having discussions with local governments. Pointing out these issues, Jichiroren members called on the three organizations to send voices together to the central government based on their common grounds, such as improving disaster-prevention systems, securing enough workforce and local budgets, and narrowing regional wage gaps. 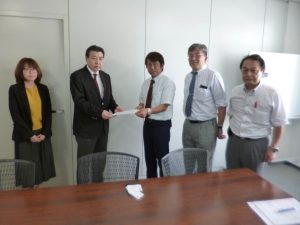 In response to Jichiroren’s call, an official of the National Governors’ Association stated: It is aware of objections to the research group’s report raised by local governments. The national government’s “Local Government System Research Council” should have discussions based on municipal opinions. It shares local finance-related requests with Jichiroren.

A representative of the Japan Association of City Mayors responded: many local governments have reached its limits due to wide-area mergers of municipalities and reduction of their employees. It is suspicious about the argument that it is better to have a fewer number of public workers.

An official of the National Association of Towns and Villages answered: the national government should not forcibly conduct municipal mergers but respect local autonomy. From the view point of those providing services for citizens, it would say what it should argue about the 2040 Initiative. Towns and villages have troubles securing technical employees. Acquiring staff is necessary for responding to natural disasters.