sed landslides and flooding in western Japan, resulting in many casualties, missing people, and damage to residents’ houses. Many municipal workers in disaster-hit areas are working hard around the clock for swift reconstruction of residents’ lives although they were also affected by the disaster.

Jichiroren raises funds throughout Japan and holds volunteer activities in the areas affected by the rainfall.

In the wake of Hiji River flooding, water supply was suspended in the city’s Nomura district. A unionized worker reported to the prefecture head office on the phone that they would soon run out stored water and food, so they were using water kept in the bathtubs for toilet.

Prefecture office members on the next morning bought water, retort foods, paper diapers, and wet wipes at drugstores in Matsuyama City and delivered them to Tsukushien in the afternoon. 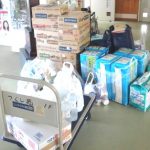 In the prefectural capital of Okayama City, union members extended support to their disaster-affected colleagues and were involved in restoration work led by local volunteer centers.

In addition to their regular tasks, municipal workers in the widely-damaged city of Kurashiki strived to receive and distribute relief supplies.

In Takahashi City, located in a mountainous region of Okayama, rail transportation remained stopped. The city workers’ union released an urgent message on its organ paper, encouraging its members to unite to reconstruct local people’s lives.

Hiroshima Prefecture neighboring Okayama Prefecture had the largest number of casualties. Members of the Hiroshima City Workers’ Union are taking part in volunteer activities day and night while striving to swiftly reopen public facilities for residents.

The Hiroshima City office dispatched its employees to several districts to fill the shortage of personnel engaging in everyday tasks and reconstruction efforts. Since the city office cut the number of its employees through reducing its tax offices, they have difficulties in securing residents’ safety. 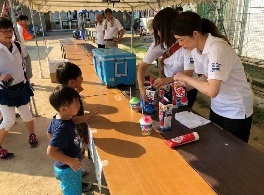 On August 4, 25 members of the Osaka Prefectural Workers’ Union in their 20s to 60s engaged in volunteer work in the Mabi district of Kurashiki City, Okayama Prefecture. They removed mud in and around residents’ houses and carried refrigerators and furniture out of houses. They also visited a temporary shelter in an elementary school and provided evacuees with shaved ice and vegetable juice. 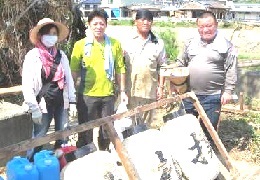 Four members of Tokushima Jichiroren left Naruto City at 4:30 in the morning of August 4 to go to Ehime Prefecture. At a flooded local facility of “Otoi Kaikan,” they moved out tools of traditional sumo wrestling and wiped dirt from them. 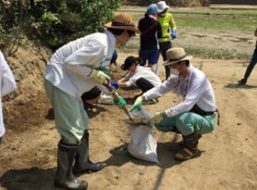 In the Mabi district of Kurashiki City, Okayama, on August 4 and 5, nine members of Kyoto Jichiroren braved fierce summer heat to shovel dried mud and put them in sandbags in local houses. A resident thanked them by saying, “We are grateful to volunteers from all over Japan for helping us do the work we are unable to do by ourselves.”

On August 5, five members of Kochi Prefecture’s Shimanto Town Workers’ Union joined the fourth round of volunteer activities organized by Ehime Jichiroren. At a garbage disposal facility in the Nomura district of Seiyo City, they helped to separate garbage into different categories, including electrical appliance, metal, wood, tatami mat, and nonburnable. 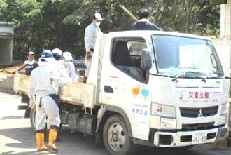 On August 10 and 11, Jichiroren members of Aichi, Shizuoka, and Nagano prefectures in Japan’s central Tokai and Hokuriku-Shin’etsu regions shoveled mud out of flooded homes in Hiroshima Prefecture. 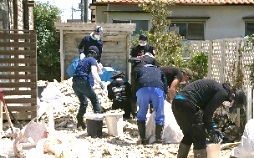 On August 19, four members of Chiba Jichiroren’s secretariat helped to clear dirt and debris from homes. They were joined by sanitation workers from Tokyo’s Setagaya Ward and Sakai City, Osaka Prefecture.