With cooperation of its members working on the frontline against the COVID-19 pandemic, Jichiroren conducted a survey on working conditions of public health center workers in April when the virus infection spread significantly. Based on the result, it formulated and released a draft policy proposal concerning public health centers and public health services, calling for the systems of the public facilities to be improved and for PCR tests to be expanded. On October 12, it held a news conference on the proposal which was reported by NHK, Japan’s public broadcaster, and national newspapers. 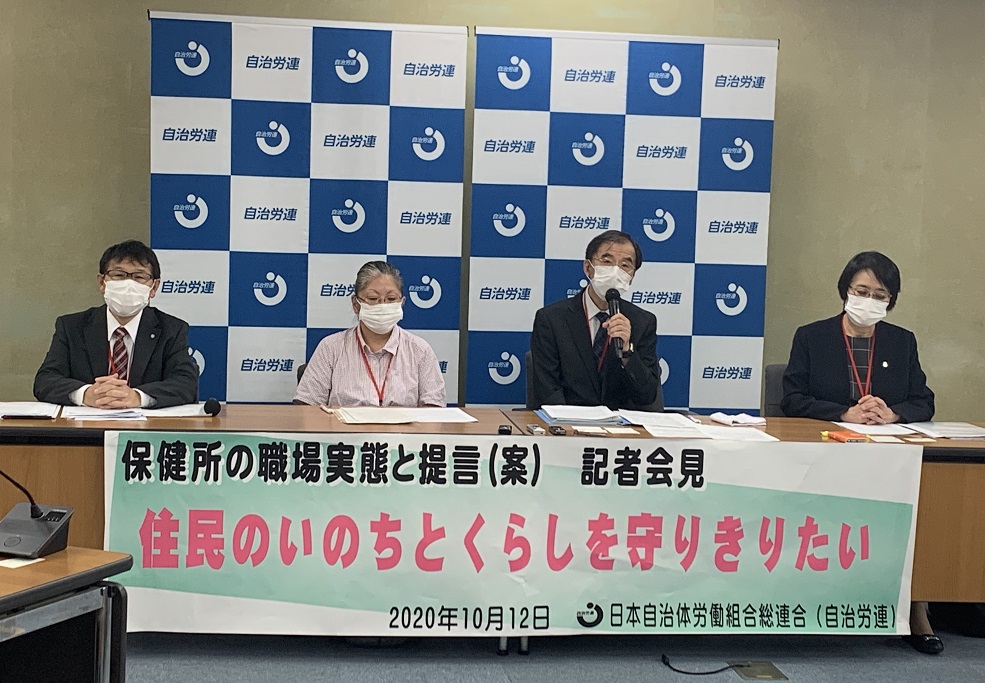 1.About 40 percent of respondents said that full-time health nurses worked “significant” or “several” hours of overtime in April. In Tokyo, Kanagawa, Osaka, and other prefectures, they were forced to work excessively long overtime hours in that month when infectious cases rapidly increased, such as “186 hours”, “175 hours”, and “147 hours” crossing the karoshi line above which people will risk death or illness from overwork.

2.Many workplaces suffer a chronic staff shortage. More than 60 percent of respondents answered that they were “severely understaffed” in April.

3.More than 70 percent of respondents said that they felt ‘extremely’ or ‘fairly’ stressed.

Under the national government’s neoliberal policies, functions as well as workers of public health centers have been reduced. To prevent the spread of the virus infection, the following five points are important:

1.Increasing the capacity of public health centers, including their workforces, in order to address needs and concerns of residents.

2.Creating a system that allows PCR tests to be appropriately carried out

3.Strengthening the system for implementation of “active epidemiological investigation”

4.Following up patients who are staying at home

5.Providing residents with information and sharing correct knowledge in order to prevent the spread of infection and eliminate prejudice and discrimination.

Jichiroren met with Diet members of the Constitutional Democratic Party of Japan on September 28 and those of the Japanese Communist Party on September 15 and requested their cooperation in realizing the items in the proposal.

In the meetings, Jichiroren representatives stated that although the need to improve the national government’s measures against infectious diseases was emphasized when the new influenza virus broke out in 2010, the government not only has neglected to address the matter but also has cut public health services. They emphasized that the national government should provide financial support to municipalities to enable their health centers and administrations to play their roles and that it also should improve PCR testing, public health centers, and medical systems in an integrated manner.

Regarding functions of public health centers that deal with not just infectious diseases but issues in a whole community, Jichiroren members explained: Each and every resident has their own difficulties and challenges, but public health centers, whose current systems are inadequate, are unable to deal with them when they are forced to concentrate their efforts on infectious cases; As some municipalities had to stop providing health checkups to infants and various other medical tests, it would be important to allow public nurses at different facilities to step out of their silos and start working together as a team for the whole community.