Members of Jichiroren’s committee for withdrawal from nuclear power generation and promotion of renewable energy, on December 14, submitted a statement calling for effective evacuation plans in a case of a nuclear accident to the Cabinet Office and had a talk with officials of the Office. 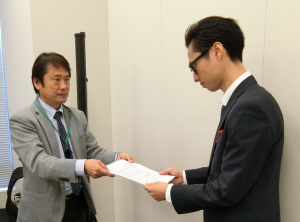 Chair Sakurai demanded that the national government do the following things: take necessary measures for local governments to develop plans to effectively evacuate residents and/or accept evacuees; strengthen financial, technical and personnel supports to them; require not only municipalities located within a 30-km zone from a nuclear power plant but all those expected to be affected by a nuclear accident to adopt an evacuation plan.

Officials of the Cabinet Office stated that requiring local municipalities within 30 km from a nuclear power plant to adopt an evacuation plan is based on the Nuclear Regulation Authority’s guidelines and that drawing the lessons from the accident of the Fukushima Daiichi Nuclear Power Plant, it has expanded the requirement area from the previous 8 km to the 30 km radius which is the IAEA’s maximum standards. It now focuses on developing effective plans to be installed within the 30-km zone, said the councilor. He added that it allows now for flexible response to channel the Cabinet Office’s funds into certain equipment purchase of municipalities preparing an evacuation plan or to host evacuees. They expressed that they try to respond to the needs of such municipalities as much as possible.

Proposing revisions of the gov’t evacuation plans to be realistic

The national government is promoting reactivation of nuclear power plants in disregard of opposition from the majority of citizens. Meanwhile, it requires local governments to adopt an evacuation plan in a case of a nuclear accident under the Act on Special Measures Concerning Nuclear Emergency Preparedness and the Basic Act on Disaster Control Measures.

The national requirement fails to effectively reflect lessons from the Fukushima nuclear accident by the following reasons: the number of personnel dealing with evacuation as well as measures for safety and health in their working conditions are insufficient; measures to evacuate people vulnerable to disasters, such as the elderly, the disabled, pregnant women, and inpatients are insufficient; some of its instructions, like ordering students to wait at their school for their parents to pick them up, contradict actual conditions; it lacks a long-term vision for housing evacuees.

Establishing the committee for withdrawal of nuclear power generation and promotion of renewable energy, Jichiroren works to urge the government to drastically shift its energy policy from depending on nuclear power generation to developing renewable energy sources. As part of the effort, it made and submitted the latest statement to the Cabinet Office.