On May 19, 100 people, including members of local unions, public workers’ unions, researchers, and journalists participated in an international symposium. With Professor Sakakibara (Nanzan University) as a moderator, five panelists gave their reports, followed by questions from the floor and discussions. 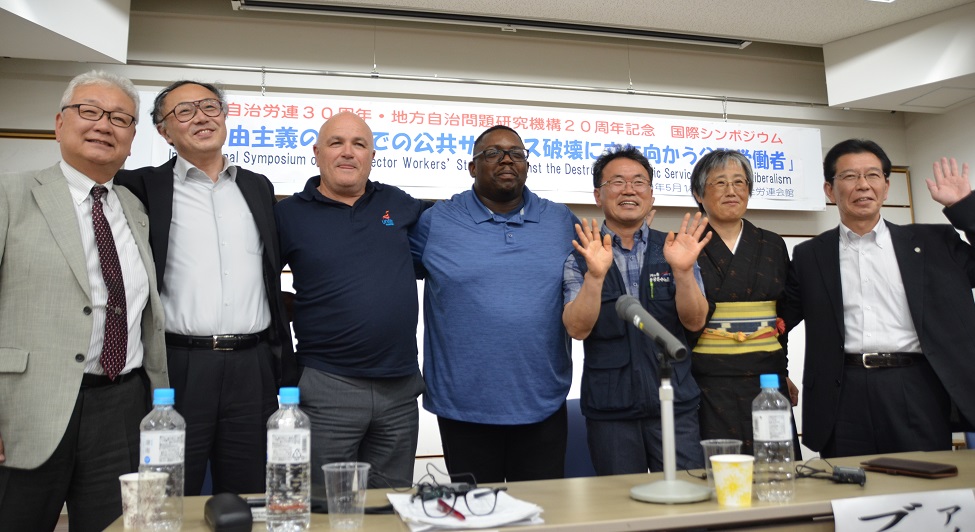 Panelists’ reports on how privatization of jobs and increase in non-regular workers in the public sector have destroyed public services and those on how unions are fighting back revealed that the issues are a common trend in the world, giving encouragement to participants and arousing their empathy.

Mark Wood (Unite the Union, U.K.) spoke of the U.K. conservative government’s austerity measures, his union’s successful strike against dismissals and reemployment of workers for wage cuts, and a social campaign against privatization of public residential care homes that was able to defend workers’ employment and prevent one of such public facilities from being privatized.

Tae-sik Lee (Korean Federation of Public Services and Transportation Workers’ Unions) explained that the Jeonbuk Equal Branch he belongs to has struggled for its members to obtain stable and regular employment, higher wages and better work systems. He reported on the union’s fight against outsourcing of water supply and sewerage services and struggle demanding that an operator of an outsourced waste disposal facility maintain workers’ wages, their working conditions and responsible management of the facility.

Bryce Carter (United Electrical, Radio and Machine Workers of America, US) talked about discrimination against African American people and destruction of public services on the pretext of hurricane damage in North Carolina where he works as a street maintenance worker. He also talked about roles of unions striving to achieve a wage hike, health and safety in workplaces, a universal health care, and infrastructure development together with other social and political movements. 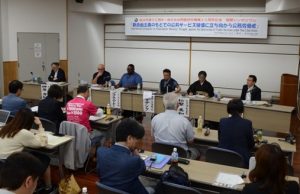 Situations in Japan were reported by Jichiroren Vice President Matsushige and Secretary General Nakagawa. Ms. Matsushige spoke on Jichiroren’s struggles against outsourcing of public services in local governments and municipal workers’ efforts to defend the Constitution and local autonomy in those struggles. Nakagawa introduced Jichiroren’s campaigns against long working hours and the increase in non-regular employment as well as a theory of municipal workers, a backbone of Jichiroren’s movement. 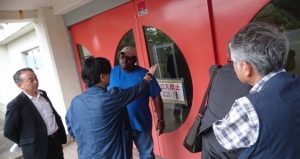 Carter and Jichiroren Executive Committee member Kumagai visited disaster-hit areas of Fukushima Prefecture, including Iwaki City and Okuma Town, where an evacuation order has yet to be lifted, guided by Fukushima Jichiroren President Kasahara and Sugaya from a joint center for reconstruction of the Hamadori area of Fukushima. They also had an exchange meeting with 15 Fukushima Jichiroren members and municipal workers of Koriyama City and Nihonmatsu City.

In the meeting, participants asked questions about long working hours, increased non-regular jobs, and organizing of young workers, sympathizing with Carter’s report on how unions in the U.S. are working hard to continue their movement. Carter stated that he was shocked to see the actual damage of the disaster and that he wants to share with his colleagues in the U.S. his hope for a swift recovery of Fukushima. 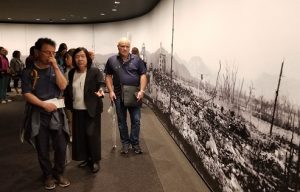 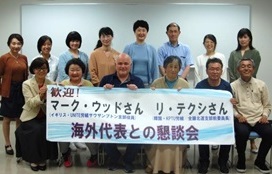 An exchange meeting in the early evening took place with the participant of Hiroshima Jichiroren President Ouchi and about 10 union members in childcare services run by Hiroshima City. The two overseas delegates showed their interest in situations of non-regular workers at public children’s centers and after-school childcare facilities and had lively discussions until the last minute. Their exchange continued at a dinner table where they enjoyed Hiroshima’s famous cuisine Okonomiyaki.