Jichiroren Secretary General Satoshi Nakagawa expressed his determination for the 2017 Spring Struggle along with representatives of other unions in front of the building of the Japan Business Federation (Keidanren), known as the center of the business community. 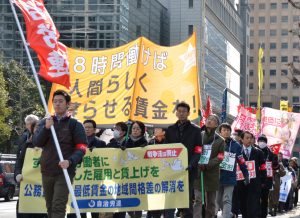 On January 19, the National Confederation of Trade Unions (Zenroren) declared the start of a series of actions in the annual Spring Struggle together with the People’s Spring Struggle Joint Committee and the Tokyo Spring Struggle Joint Committee. They called for the following targets: to urge major corporations to fulfill their social responsibilities, to win a drastic and bottom-up increase in wages, to secure stable and quality jobs, to create a locally-circulating economy by supporting mid- and small-sized businesses, and to establish a peaceful and safe society. About 1,300 people, including Jichiroren members (in the right photo), took part in demonstrations and other actions in Tokyo’s business districts on that day.

The Abe Cabinet’s growth strategy is aimed at supporting global companies to expand their overseas businesses and reestablishing neo-liberal reforms. While promoting the Trans-Pacific Partnership (TPP) trade pact, nuclear power plants, and weapons exports outside Japan, it tries to persuade business entities to enter into social security services and to put public  services into the market. 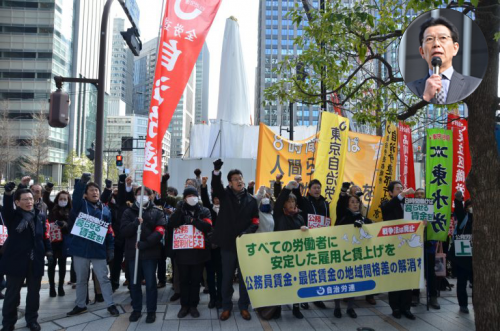 By implementing the so-called ‘Top Runner Program’*, the Abe Cabinet plans to determine the amount of tax money allocated to local governments by how many jobs they have outsourced to the private sector. In other words, it seeks to induce municipalities to contract out more jobs by cutting the supply for them.

Originally the TRP was introduced, following the 1997 Kyoto Conference on climate change and the drastic revision of the energy conservation act the year after, in order to require manufactures to improve energy efficiency in production process. To use the framework for preventing global warming and conserving energy to cut public services and make profits is the height of folly.

The Top Runner Program was planned to be applied to municipalities’ operations, libraries, children’s centers, youth education facilities, and to public universities. Jichiroren has made efforts to develop cooperation against the plan. In autumn last year it requested national organizations of local chief executives to work together in this issue.

In autumn 2016, the Japan Library Association submitted to the education minister and the internal affairs minister a written request demanding the cancellation of introduction of the TRP into libraries.

The National Governors’ Association in its proposal on tax finance demanded that the Top Runner Program not undermine the function of the tax system to secure revenues allocated to local governments.

Amid the increasing criticism raised by such organizations, the Ministry of Internal Affairs and Communications had to postpone the introduction of the Top Runner Program into libraries and four other institutions in its local budget proposal for the next fiscal year.

Jichiroren continues to increase its regional cooperation in order to develop local economy and improve public services insead of the corporate-oriented growth strategy.