Firefighters call for govt. to end Power Harassment at work

Members of the Fire Fighters Network (FFN) talked with national government officials over “power harassment” at work places, asking for its elimination, at the office of the Fire and Disaster Management Agency on April 14. 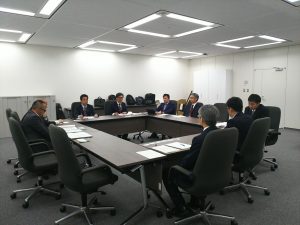 Mr. Harashina, general secretary of the FFN, clarified what’s going on at the work places of firefighters, saying “Corporal punishment is often used at fire academies. Firefighting personnel, coming to take it for granted, are then assigned to local fire stations.”
“I saw some colleagues quitting their jobs due to power harassment they suffered,” said Ms. Nakachin, member of the FFN and one of the first women firefighters in Japan. “The working environment is still unsuitable for women to work effectively,” she said and stressed the necessity of improvement in the situation.
Jichiroren’s Executive Member Matsubara who attended the talks demanded that the right to organize be restored to firefighters in accordance with ILO’s recommendations. “Under the circumstances of being deprived of the right to form a union, it is hard for firefighters to openly discuss working conditions. Such a stifling atmosphere makes their work places a hot bed of power harassment,” he argued.