The municipal office of Ito City, Shizuoka Prefecture, has reduced the number of its public employees by more than 260 for the last 20 years. In order to improve any workplace where permanent staff are wholly insufficient for the task, members of Ito City Workers’ Union have continued their annual action to submit their written requests to the city authorities for eight years in a row. 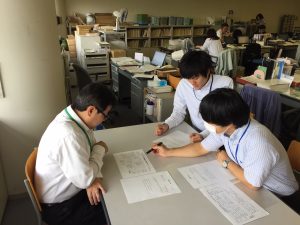 Every year, the union conducts a questionnaire on workers’ demands by the end of May in order to find out their situations regarding staff shortage and overtime work. Based on the findings, it figures out how many more employees are needed for what jobs at which sections. The union’s executive body produces a draft of requests, followed by workplace meetings where it discusses the draft with members at work to have as many reasonable grounds as possible for each item. Thus, the final text fully reflects the collective will of union members. 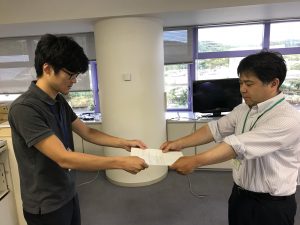 In early July, the union submitted the request to and had talks with each section manager, calling on them to convey the union’s demand to related bodies, such as planning and financial divisions. With section managers who are aware of conditions of employees, the union was able to share actual conditions of workplace, including staff shortage, workloads, and overtime work. One of the section managers expressed in the talks that he found it difficult to improve the working environment although he tried to tell the situations to his supervisors.

Last year, the union requested that the municipal office hire 53 employees, including clerical and technical workers, at 25 out of 28 sections. It also submitted this request to the mayor, demanding that the city secure enough personnel in its annual recruiting of new workers.

As a result, the city office decided to maintain its 600 employees this year. The union was able to stop the reduction of workers the authorities had continued for a long time by collecting workers’ voices and continuously demanding for a better workplace despite difficulties. Even after submitting the request, the union had talks with each department manager in mid-October, when the city draws up a draft budget for the next fiscal year, asking them to convey the union request to the human resource department.

At a collective bargaining in October, the union demanded that the city secure sufficient number of employees to be able to respond to natural disasters. A vice mayor answered, “Although we have cut the number of employees in accordance with our streamline plan, we would like to consider having more staff to certain sections if necessary.”

The union’s executive branch is determined to demand that the city office resume hiring of new technical staff and have regular workers to fill in for those on childcare leave in order to win a more drastic increase in employees. It plans to have the human resource department to release a concrete staff arrangement plan in January, and to see if it reflects the union’s demand.