Jichiroren working for amendment of bill, better services for residents, and protection of non-regular workers’ employment

On May 11, a bill to amend the Local Public Service Act and the Local Autonomy Act, proposed by ruling parties, was enacted with the support of all 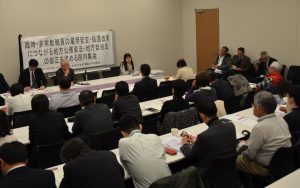 political parties except the Japanese Communist Party. The amended law is intended to give clear legal grounds to the employment of about 640,000 temporary workers in local municipalities in Japan (23% of all municipal workers) and to improve their wage situations.

Jichiroren made efforts to help non-regular workers understand the contents and aim of the bill and to get the bill modified. It carried out rallies and lobbied the government and Diet members. Submitted to the Diet on March 7, the bill was initially planned to be put to the vote following a brief deliberation. However, on April 13, Yuko Ogawa on behalf of Jichiroren expressed her opinions and clarified problems of the bill in a Diet session. Ogawa is a non-regular worker at an after-school child-care center. Although we were not able to realize the amendment of the bill, our campaign has pushed the Diet to increase non-regular workers’ wages and achieved government officials’ remarks in Diet deliberations that that non-regular employment should not be expanded.

Based on the amended Local Public Service Act, negotiations will be carried out by non-regular workers in each municipality for better wages and regular employment positions. We will make efforts to develop our campaign to achieve our goal. In order to avoid hiring of more regular workers, municipal authorities could outsource jobs assigned to non-regular workers to private entities. Jichiroren continues to promote our movement demanding that municipalities assign jobs to regular workers to be responsible for services necessary for residents.