On March 7, when the 2019 Spring Struggle came to the most important stage, about 250 Jichiroren members braved cold rain to join a central action for the victory of the annual struggle. The action was organized by the National Confederation of Trade Unions and the People’s Spring Struggle Joint Committee. 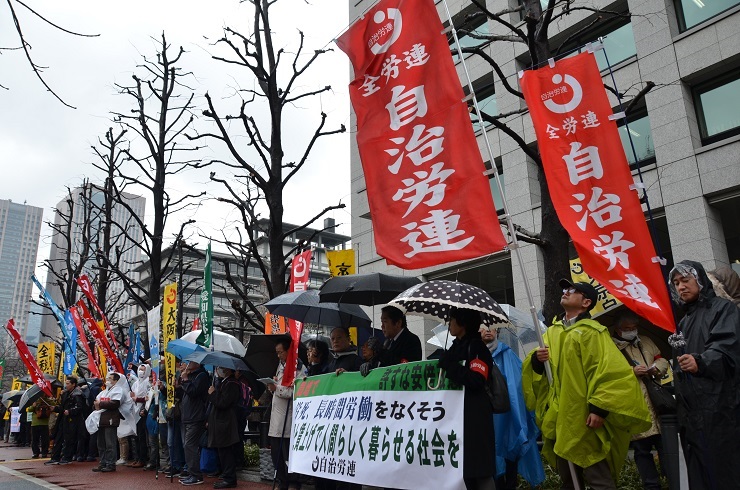 In front of the Ministry of Internal Affairs and Communications, Jichiroren members demanded that the national government protect jobs for workers on a “fiscal” year-term appointment and improve public services. Jichiroren President Hitoshi Saruhashi urged all Jichiroren members to take part in the Spring Struggle to win a pay raise for public workers who are committed to developing residents’ livelihood and local economy.

After that, 30 representatives of local organizations lobbied parliamentarians.

On March 14, Jichiroren held nationwide actions in response to major companies’ answers to union demands. The following are reports of actions Jichiroren’s regional organizations and locals organized in their workplaces and communities. 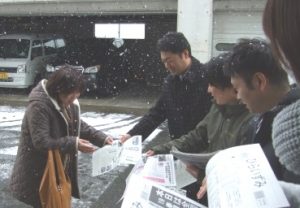 In Yamada and Hiraizumi towns, all executive members of municipal workers’ unions handed out flyers in front of town buildings. They said, “Good morning!” to union members who were going to work and asked them to join Spring Struggle-related activities. 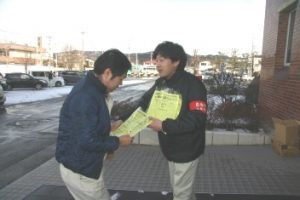 All executive members of the Ofunato City Municipal Employees’ Union, whose average age is 30 years old, took part in an activity to distribute about 300 flyers to their colleagues. Vice President Yu Niinuma called on union members to band together, saying, “It is important for municipal workers to work closely with residents. Let us work hard for their fundamental human rights to be respected and their right to live and pursue happiness to be realized.” 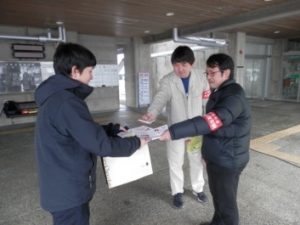 Members of Kuji City Workers’ Union carried on their tradition to hand out a set of three Spring Struggle items (flyer, pocket tissue, candy), while calling on workers to unite to achieve their demands. 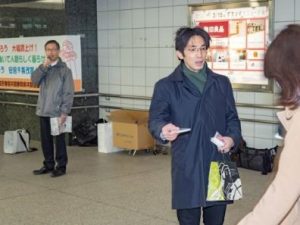 On March 14, Shizuoka Jichiroren, together with the Shizuoka Regional Council for Trade Unions, held a publicity action on an underground north street of JR Shizuoka Station with 10 participants.

While explaining through a microphone answers given by major companies on the previous day regarding unions’ demands for a pay raise and distributing flyers, they stated that employers can increase their employees’ wages drastically only by using a small portion of their internal reserves. The participants then joined another action to support a time-limited strike conducted by the Japan Metal, Manufacturing, Information and Telecommunication workers Union (JMITU). They encouraged workers for a giant corporation of telegraph and telephone by stating that the employer should return its retained earnings of more than 10 trillion yen to fulfill its social responsibility as a major company.

A union of Hamamatsu Medical Center workers held a collective bargaining regarding their Spring Struggle demands with 22 members participating. 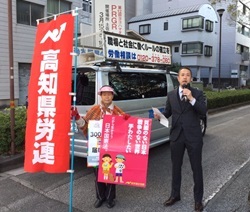 Kochi Jichiroren organized a street action during communing hours on March 14, where representatives of industrial unions expressed their demands and determinations. Kochi Federation of Trade Unions President Tsutsui, who is also the president of Kochi Jichiroren, declared his determination to fight to achieve residents’ demands and to change politics to that end.

Nankoku Jichiroren conducted a collective bargaining regarding an overtime cap. In their organizing effort, members of the cleaners’ union in Konan City reported to their colleagues situations regarding the Spring Struggle and conveyed a headquarters message to them.