Act this summer for future without nuclear weapons Passing on the wish to next generations  Nagasaki-Jichiroren, Nagasaki Shiju

The Treaty on the Prohibition of Nuclear Weapons was adopted in the United Nations in July. Calling for the adoption of the treaty, Jichiroren conducted the “Hibakusha Appeal” international signature campaign. Its members collected signatures in the atomic-bombed cities of Hiroshima and Nagasaki. Ayaka Mine, member of the Nagasaki City Employees’ Union (Nagasaki Shiju), talked about her wish. She works at the Nagasaki City Office’s division for inheriting Hibakusha’s stories.

The division for inheriting Hibakusha’s stories is located inside the Nagasaki Atomic Bomb Museum. Its staff members in the peace study section are assigned to organize peace events for youth, promote peace memorials, and make peace study materials, while others are tasked to collect, preserve, manage, and exhibit A-bomb related materials. 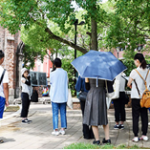 Photo: Ms. Mine (second left) told in front of a cenotaph within the Hiroshima Peace Memorial Park through a tour of monuments of the atomic bombed including the hypocenter and elementary schools. The tour was launched as part of the city’s project for inheriting Hibakusha’s experiences.

Mine, who belongs to the peace study section, expressed her joy about the conclusion of the treaty in the U.N. by saying, “The Nuclear Ban Treaty is a great step for the abolition of nuclear weapons, which has been continuously demanded by Hibakusha through their A-bomb stories.” She added, “In my job as well as my personal peace activities, I have often heard Hibakusha saying that they never want to see the same tragedy happening again and that they need to make their A-bomb experiences heard by more people. I want to keep helping them pass down their stories to next generations.”

Promote opportunities to think about peace

Mine’s division is working on a project to pass down Hibakusha’s testimonies to younger generations. In July, it hosted meetings between Hibakusha and those who wish to tell their stories on their behalf. In mid-August, it started giving instructions on how to interview Hibakusha and how to convey their stories.

“To create and support ways and opportunities to talk about peace is what I wanted to do the most. I always think before anything else about how to realize Hibakusha’s wish and express what they want to express,” said Mine.

She added, “We have accumulated our activities, and this project is now in its second year. I hope this project, involving wish and hope of both Hibakusha and their storytellers, expands inside and outside Nagasaki so that people have more opportunities to think about peace.” 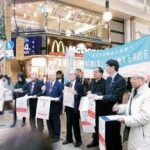 Nagasaki Jichiroren members have taken part in signature drives and street actions organized by the Nagasaki prefectural association for promoting the “Hibakusha Appeal” campaign as well as collected signatures in their workplaces. They continue to conduct the signature campaign and urge the Japanese government to ratify the nuclear ban treaty.