2022 New Year Message from the President

We wish you a Happy New Year

It has been more than two years since the novel coronavirus began to spread around the world. Based on experiences of the once-in-a-century pandemic and repeated natural disasters, we must review the present political and economic systems and build a society that prioritizes the lives and livelihoods of the people. 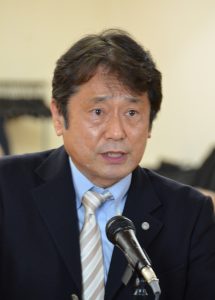 In 2022, the first meeting of state parties about the Treaty on the Prohibition of Nuclear Weapons, which entered into force last year, is scheduled to take place. We need to develop collaboration with people in the world on each and every issue this year.

Meanwhile, Japan is going against the global trend: it won the “Fossil of the Day Award” consecutively for its climate policies; it continues to turn its back on the Treaty on the Prohibition of Nuclear Weapons; and it refuses to allow married couples to have separate surnames while it ranks 120th out of 165 counties in the Global Gender Gap Index. We believe that the current coalition government deserves the “Fossil of the Day Award” for maintaining such policies.

Our colleagues working in municipal governments and related public services have been struggling day and night to protect residents’ lives and livelihoods even as their workplaces and personnel have continued to be cut.

Eleven years have passed since the 2011 Great East Japan Earthquake. An industrial physician who was working in the disaster-hit Ofunato City at that time said, “Municipal services open without any days off. … If city employees fail to maintain their health, local relief and reconstruction activities for disaster victims will not last long.”

In order to protect the lives and livelihoods of both residents and municipal employees and to create workplaces where everyone feels fulfilled in their work, let us join forces nationwide to improve public services, including an increase in the number of employees, and to block adverse revision of the Japanese Constitution. We look forward to working with you in 2022.