2022 Nationwide Peace March : Appeal to public for importance of calling for nuclear weapons abolition amid war in Ukraine

Calling for a peaceful and hopeful world without nuclear weapons, the Nationwide Peace March has been held annually in all prefectures, cities, towns, and villages in Japan. Jichiroren has taken part in this peace action every year. With the start of the two of its major courses on May 6 (from Tokyo to Hiroshima, from Wakayama to Hiroshima), participants in the 65th Nationwide Peace March are walking toward Hiroshima, where the 2022 World Conference against Atomic and Hydrogen Bombs will be held in August.

A starting rally for the peace march in Kagoshima Prefecture–situated at the southern end of Kyushu Island–which is on the Okinawa-Hiroshima course, took place at Minato Odori Park on June 10 with about 70 participants. Organizing committee chair Yuko Fukumaru stressed the significance of the peace march calling for the abolition of nuclear weapons amid the war in U 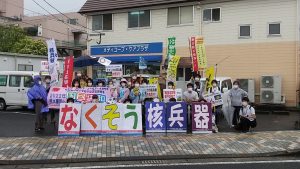 kraine. After the rally, they appealed to passers-by for a nuclear-free, peaceful and just world in front of the city office building, on Izuro Street, and in front of a Co-op grocery store in the Tagami district.

On June 13, Kagoshima peace marchers visited the Ibusuki City Hall and met with the municipality’s general affairs department head and the city assembly’s secretary general. They requested the two officials to endorse the peace march and to sign a petition which will be submitted to the president-designate and state parties of the 10th NPT Review Conference. After the meeting, they held another appeal action in front of the city hall.

In the afternoon, following a rally at Taniyama Daiichi Chuo Park, they vigorously appealed for the abolition of nuclear weapons during a short march and at a gathering in front of the parking lot of Kagoshima Seikyo Hospital.

Peace marchers in Kagoshima focused on visiting local governments this year. An official of Hioki City told them that the signature campaign endorsed by Nagasaki City Mayor Tomihisa Taue, who is also the chair of the Kyushu Association of City Mayors, can be accepted by many people. A Nagashima Town official shared with them that the municipality has utilized profits from its wind power generation to promote childcare services. The peace march will be taken over by Kumamoto Prefecture on June 24, after taking action in various parts of the prefecture. 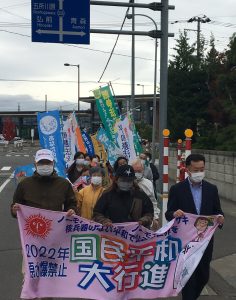 On June 7, local peace activists held a rally in front of the Goshogawara City Hall, Aomori Prefecture—the northernmost prefecture of Honshu Island, the largest island of the archipelago nation–to take over the peace march from the Tosei region, the central part of the prefecture, more than 20 people participating. (Three members of Aomori Jichiroren and the Goshogawara municipal workers’ union took part in it.) the Seihokugo Council against A & H Bombs’ chair Kami (Aomori Jichiroren secretary general) emphasized the importance of the peace march for the elimination of nuclear weapons.

On June 8, participants of the peace march visited local municipal governments in Goshogawara City, Tsugaru City, Tsuruta Town, and Itayanagi Town. As The Seihokugo Council against A & H Bombs also marched on a local course from Ajigasawa Town to Fukaura Town, peace marches and visits to local governments took place in every municipality in the Seihokugo area. In the Namioka district of Aomori City, 35 participants from the Seihokugo region and the Chukonankoku region marched together from JR Namioka Station and held a handover rally.