2017 Spring Struggle: Let us join forces nationwide in order to realize demands in workplaces and communities 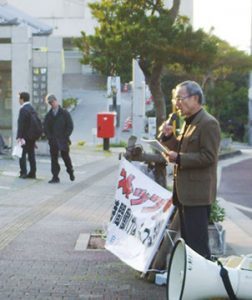 Calling for a drastic wage increase from the bottom up and a society where workers and citizens can live and work without anxiety, labor unions affiliated with the People’s Spring Struggle Joint Committee carried out nationwide actions on March 15, the due date for response from most companies to union demands, and on March 16. Jichiroren members from Hokkaido to Okinawa prefectures visited workplaces and communities as well as conducted study sessions to share their voices. Union members in Iwate, one of the prefectures severely hit by the Great East Japan Disaster in 2011, have been active in this campaign.
(photo: members of the Okinawa public services workers’ union calling for eradication of unstable jobs and better working conditions for non-regular workers) 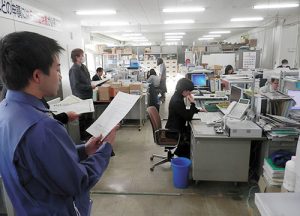 Ofunato City workers’ Union, Iwate Prefecture, conducted an explanatory meeting about the Spring Struggle at their office on February 8. Yusuke Oikawa (photo), who was just elected as an executive committee member, explained to his colleagues what is important to keep in mind in the Spring Struggle and about items of the demand the union submitted to the employer. He asked them to take part in the union activities.
It has been six years since the Great East Japan Disaster. In Ofunato City, the construction of disaster-proof public housing units and their relocation to higher ground has completed mostly. On the other hand, as some residents have not been able to move out temporary shelters due to various reasons, bipolarization of victims and disaster-hit areas are called into question.
The structure of the workplace needs to be improved in order to allow its workers to continuously engage in reconstruction jobs in the long run. Roles and missions of labor unions to protect workers’ lives and health have become significant.
Oikawa said, “It was a fresh experience to appeal for support to the Springe Struggle with my own voice. I will continue to work with colleagues in workplaces and communities to further promote the Spring Struggle.” 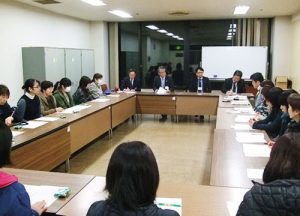 Oshu City Temporary Workers’ Union, Iwate Prefecture, together with the municipal workers’ union, held collective bargaining talks demanding better working conditions for temp workers and won a higher daily unit price for the next fiscal year (Photo). The union has struggled to achieve better treatment and benefits for temporary employees and obtained the same commuting allowances as regular workers and special paid leaves for nursing children.
In Oshu City, after its merger with nearby municipalities, the rate of non-regular public workers became about 40 percent. The rate is expected to further increase due to the restraints on hiring regular workers.
“Although the power of each individual is small, we will unite to realize our demands in workplaces.” Members of the temporary workers’ union are determined to strengthen their solidarity and continuously carry out their activities following the Spring Struggle.